The other day my nine year old informed me she was going to be a baker when she grows up.

“For my first project, I’m going to make cake pops,” she added.

This statement filled me with hope and dread.

Hope because I could see big things in her future. A finalist, perhaps, in the Great British Bake Off. Maybe even a spin off series?

Dread because who the hell knows how to make a cake pop?

I told her to get together a list of ingredients and look up the instructions.

BUT: we didn’t have the proper sticks.

“Let’s try popsicle sticks,” she suggested. We had some of those in the craft bin.

We watched a couple YouTube videos, then embarked on the first baking project of Joy’s career.

Next step: scoop the cake into mixing bowl and combine with a tub of frosting.

Here’s where things went south. We enlisted my husband who has far superior upper body strength for mixing. I looked away for a minute! When I looked back, he had liquified the two into a wet, gooey, non-workable glob.

There was no way we would be rolling that mess into balls.

Which leads to the next snafu.

But the wafers didn’t really melt into anything dippable.

And the popsicle sticks from the craft box? They were the largest popsicle sticks I had ever seen. Joy took a bunch to her room and returned with a pile of what appeared to be tiny spears. She had managed to cut the sticks smaller but I told her we’d better stick with the full sized ones because nobody wants to get a splinter eating a cake pop.

After a couple of hours, we had no cake pops. Only a liquefied mess of cake and frosting in the fridge that to me looked like something someone had regurgitated, a double boiler mess of melted wafers that had hardened to the consistency of cement over my spoon. And a pile of broken pop cycle sticks.

Her baking career was over before it even got started, she pointed out dramatically.

Anything you are looking to achieve will be like trying to figure out how to make cake pops.

Before you begin, you will experience the same combination of hope and dread. You will see great possibility in your future, then you will say to yourself, “I sure hope this works.”

You will embark… and EVERYTHING will go wrong.

You will enlist someone to help and they will over stir the batter and the frosting.

You will not be able to roll this glob into balls.

Your cake pop sticks will be wrong.

Your chocolate wafers will not melt.

You will be left with a mess of broken popsicle sticks, spoons trapped inside hardened wafers like a prehistoric mosquito in amber and a mix of batter and frosting that looks like barf.

At this point, you might be tempted to look at the mess and declare, “my dream was over before it even started.”

This is where I want you to pause and ask yourself:

What successful baker, entrepreneur, fitness buff, or writer ever said, “I hope this works” then promptly gives up after their first project goes terrible?

The successful baker makes it work.

I guarantee you that French guy on Nailed It had to face many a broken popsicle stick in his career.

Harry Potter was turned down 12 times before J.K. Rowling managed to sell it for the equivalent of 4k.

Oprah Winfrey was demoted from co-anchor to morning show “cut-in” at one of her earliest jobs.

Michael Jordan was cut from his high school basketball team!

Which is why I will show my little baker there is something to learn from mashed batter, broken popsicle sticks and non-melty melting chips.

I got some real cake pop sticks at Albertsons.

I bought another batch of batter and frosting.

And, as sure as cupcakes have sprinkles, we are hitting it again tonight.

Until we achieve an edible fucking cake pop.

And my child understands what it really takes to succeed. 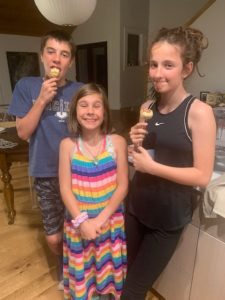 @ronalbano How many thanksgivings has it been? Gra

9 years sober and proof that you can still have fu

Happy birthday my love. You are a gift to everyone

Me coming out of the bathroom.