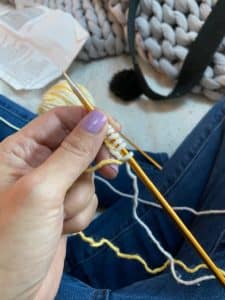 In Finding Your Own North Star, Martha Beck shares a concept called “the urge to merge.” It’s an “intense, almost chemical reaction that comes out of nowhere that makes some person, place or thing so attractive to you that for a while you can’t think about much else.”

Giving yourself permission to follow the urge to merge, she says, will lead you towards your “North Star,” aka your true purpose in life.

I confess… after watching the The Twilight Series for the first time, I became obsessed with Robert Pattenson and could think of little else for five entire days.

I followed my urge to merge into many youtube promotional videos and a howard stern interview but never quite learned what Robert has to do with my destiny.

That said, I have had many other urges over the years. Once I wanted to attend a psychic fair back when the twins were infants. My logical brain thought I was nutso especially with the babies at home. My husband agreed. Still, I went. Because, once identified, the urge to merge requires action.

I met with three psychics, a palm reader, a medium and a candlestick maker (just kidding it was a tarot card reader). Each one told me I was a healer. This was a big deal for me. I never saw myself as a healer. It’s why I became a life coach.

Then last year I experienced a strange urge to do head stands. It wasn’t an “intense, chemical reaction,” like my crush on Rob but despite everything I’m telling you now, I didn’t do any head stands, probably because of a bad experience once. I’ll never know what I was destined to learn there. The urge is gone so I missed the boat.

And now I have an urge to merge with all things cozy. Again, we’re not talking about an intense, chemical reaction but It’s cold out there. The mayor has ordered another two week pause and my kids are still here needing meals and emotional support (from a woman who forms strange obsessions with fictional vampires)…

In this case I am following my urge. Like my Norwegian ancestors I am seeking a mood of coziness and comfortable conviviality with feelings of wellness and contentment. “Hygge” is becoming a household word here in the States in part because none of us can go anywhere. So I say if you can’t beat em join em. After all, the Norwegians are some of the happiest people on the planet despite months of cold and darkness.

Last month I was flirting with depression. But thanks to this urge I’m feeling much better. Many times your urge might defy logic. This is true in my case. I can attest that pre 2020 Amy loathed winter. Winter sports? No. Snow? Meh. Christmas? Too much work.

This year I’m singing “It’s the most wonderful time of the year,” and thinking about making some Christmas cookies. And what I’ve learned is that my obsession with cozy is exactly the medicine I needed.

All to say that you should follow your urges even when they make no sense. Even if they aren’t the intense, chemical reaction that Martha describes. Even if they lead you into youtube promo videos about Indy films you have no intension to watch, ever. Sorry Rob.

And if you desire to cozify your quarantine, here are my favorite ways to merge with cozy:

Space – Since everything is pretty much cancelled, relax and luxuriate in the new found time you have.

Tea – Drink tea. I love the Tulsi Rose and anything from Pukka.

Fleece – Wear cozy things. I bought some new fleece on sale at Gap . So cozy.

Candles – Don’t just keep them around for show. Light them up.

Sleep – Hey why not sleep in an extra hour if you can?

Books – Read some. (While drinking tea.)

Walks – Bundle up. Get a dog or a kid or put some earbuds in and enjoy some fresh air. Count your blessings while you do it.

Weighted blanket – I have had the best sleep of my life since using this. Highly recommend.

Hot baths – Be sure to put some bath salts in there.

Art – I’ve been doing art with my daughters at night. Get some coloring books or subscribe to an art box. I’ve tried a few subscriptions. My ten-year-old loves the maker box from kiwi.co and my twelve year old loves sketchbox. I’m waiting on a box from Let’s Make Art but so far I’ve been bummed about the customer service.

Knitting – Start a new cozy hobby. I used to knit when before the babies and I’ve had an urge to start it up again.

Puzzles – And other games. I’m a little obsessed with subscription boxes and might try Hunt a Killer (it’s a murder mystery box — how cool is that?!).

The bottom line is this: If you have an urge to merge, it might be weird but it ISN’T frivolous. It might be exactly what you need. I double dog dare you to follow it and see where it takes you.

Disclaimer: This was written by an able-bodied cisgender white female who owns a peloton. So take everything I say with a grain of salt. And no I’m not arguing that depression can be cured with a puzzle or a candle. Seriously, I’ve got a ton of privilege. Times are hard and people are struggling. Do what you can people. Sending love.