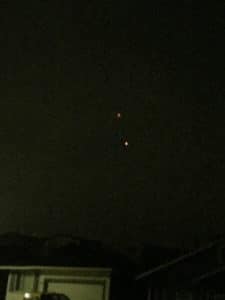 I grabbed this image from the MUFON website to give an idea of what I saw.

“Imagine you are looking at a rainbow.”

It was a Saturday night and I was lying on my bed listening to Srikumar Rao talk about happiness.

“You don’t say to yourself, ‘that’s a beautiful rainbow but it needs a little more color or it needs to be closer to that mountain. No, you relax into the beauty of the rainbow and accept it as it is.”

Ron and the kids were downstairs watching a Marvel movie. I have never been a fan of the genre.

“And yet,” Srikumar Rao continued, “We do exactly this in our life. We say ‘My children are wonderful but I just wish they’d keep their rooms clean or get better grades or remember to say thank you.’”

Your life, he explained, is just as beautiful as a rainbow. You just keep subscribing to a flawed notion of happiness. You think I’ll be happy if. I’ll be happy when.

The if/then model of happiness is not a new concept to me but there was something about the way Srikumar Rao said it that unlocked something. I was really vibing off his message.

There’s a window along the north wall that doesn’t offer much of a view from the bed. In the daylight I can see a few treetops. At night, it’s mostly darkness. A few feet over from the window are a couple of glass doors that open up to a balcony where I sometimes watch the sunset. And the stars. The stars are so much better away from the city. I can see so many stars from this balcony.

“Your life is as beautiful as the rainbow,” Srikumar Rao said.

I lay sideways on the bed, head propped in hand, feeling expansive and grateful for my beautiful rainbow life. For my health. The health of my family. The beautiful home we get to live in.

“You get exactly what you need at precisely the time you need it,” he said.

And that’s when I looked up and out the window. I peered into the blackness and noticed a couple stars. Wow, I thought, those are bright stars. In fact, I don’t remember even being able to see stars out this window before.

“When you sing in the shower,” he said, “you aren’t singing in the shower so you can be happy. You sing as a spontaneous expression of your happiness. That is how you must take action in the world. Not because it will get you to point A or point B so you can be happy. Take action as a spontaneous expression of your joy,” he said.

I stared out the window thinking about all this and appreciating how bright the stars looked that night.

And that’s when one of the stars moved. It wasn’t subtle. This “star” took a sudden and rapid nosedive in a vertical trajectory and disappeared from my view. I wish I would have ran to the balcony for a closer look.

But I’m not going to lie, I got scared. It was pretty instant. I became aware that I was NOT in fact looking at stars. And I’ve seen too many alien movies. Why are aliens always bad in the movies?

I jumped up from bed and ran downstairs where my husband and kids were sprawled out on the couch. There’s a sliding glass door in that room that faces the same direction as the window in my bedroom. I looked outside to see if I could see the same bright light that looked like a star flying around. But it was gone.

Later that night, back in bed, I checked the window again. There were no stars visible from my spot on the bed. I told my husband who’s number one strength according to the Strengthsfinder assessment is analytical thinking. Let’s just say my husband is highly skeptical of all things, especially the fun stuff. I have to hand it to him though, for someone so firmly rooted in everyday 3D reality, he puts up with a lot.

He helped me think of other explanations. Maybe my iphone flashlight was on and had reflected off the glass? We ran through a simulation, but it did not produce the same effect.

Maybe it was a shooting star? No. The object moved straight down in a vertical line. Too symmetrical.

“Maybe you are going crazy?” he finally offered.

Full disclosure. I’m pretty sure my husband thinks I’m crazy. But he loves me anyway.

I’ve always been in to UFO’s. I dragged my husband the International UFO Museum and Research Center (and giftshop) in Roswell and I made him talk to me on a UFO stargazing tour in Sedona where we got to look out at the night sky with military grade goggles. (That in and of itself was worth the price of admission. You could see the milky way in so much detail.)

So let me put it out there. I believe in aliens. I think there are different species. I think we are visited. Seriously how else can we explain the crop circles???  I think there may be hybrids walking among us.

And I’ve always found comfort in the stars.

So there you go. Maybe I’m crazy. But I one hundred percent believe it was a UFO.

“You get exactly what you need at precisely the time you need it,” Srikumar Rao had said right when I chose to look up.

I’m going to choose to believe that I was shown a UFO in that moment because there was something important about me seeing one.

Crazy or not if I see another bright light in the sky that moves like a spaceship, I’m not going to run away.

I’m going to stand on my balcony and admire it.

For more on UFO sightings and other interesting stuff about aliens check out MUFON. Gaia TV has some fun stuff too.