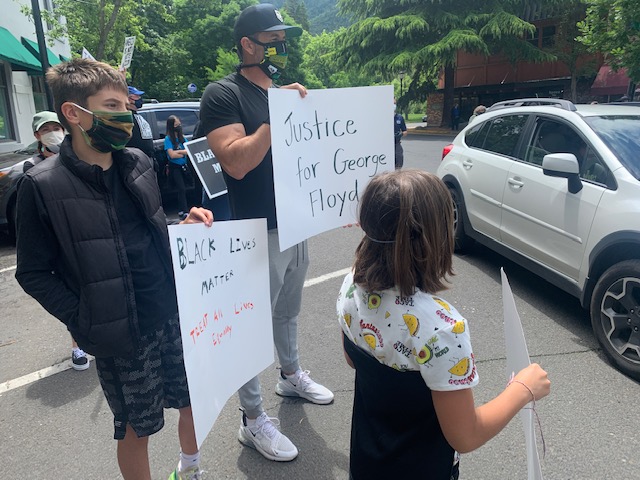 Last week I wrote a post about why we say Black Lives Matter.  It was shared 290 times.

Speaking out is scary.

As a white women I have been hesitant in the past to talk about race.

Mostly out of fear of saying the wrong things.

Because I don’t want to hurt anyone,

But also, if we’re being honest, because I don’t want to expose my own ignorance or be corrected.

I did this because I want more women to understand that failure really is the path to success.

I think a lot of women believe that some people are just born successful.

Like they always do and say it right on the first try.

It’s absolute bullshit. And these interviews show it.

How do we ever learn anything if we never let ourselves fail?

So as a privileged white woman, I’m letting myself fail at talking about race.

A couple of days ago, I got an email from Jay Jay Ghatt a Black social media influencer, pointing out that I called Black Lives Matter a “meme.”

Here’s what she said, “BLM started as a campaign to elevate awareness of the systematic killing of unarmed men, women and children of the black race by tax payer funded state agents with impunity, starting with the 2013 killing of Trayvon Martin by George Zimmerman.”

At first my white ass wanted to be like, “but, but, but.”

And then I reminded myself that this was actually helpful perspective

I didn’t want to minimize the significance of the movement by calling it a mere “meme.”

I had to put away the part of me that wants to do things right (all so I could keep feeling good about myself).

I had to remind myself that this shit is NOT about me.

That it’s is so much bigger than my ego.

And then I had to offer myself compassion for the knee jerk reaction to protect my ego at the expense of black lives.

I had to remind myself that I am a human. I am not perfect. But when I offer myself a soft place to land,” using Kanesha Baynard’s words (she used this phrase in her interview and I loved it), I open myself up to LISTEN AND LEARN.

Which is why I will continue to take imperfect fucking action in support of racial equality everywhere.

Which is also why I will not allow my ego and my knee jerk reaction to want to protect it to overshadow my desire to be an ally and contribute to real change in this country.

Which is why, when I do get called out or corrected, I will LISTEN AND LEARN and take my next action from a more informed place.

Here’s what I’m doing to support of Black Lives Matter:

(I’ve been a member of Southern Policy Law Center.)

I purchased the Kindle edition of Me and White Supremacy.

I also purchased Why are All the Black Kids Sitting Together in the Cafeteria.

I’m making my children read books and watch films about race. Netflix has a curated selection of films and shows here.

My eldest daughter is reading The Hate You Give and we plan to watch the movie this weekend.

My husband and I saw No Crossover: The Trial of Allen Iverson. Gut wrenching.

My husband and I took the kids to a demonstration the weekend before last and I’m committed to keep doing it.

I’ve purchased trainings taught by Black leaders in my community and attended a town hall hosted by Rachel Rodgers yesterday.

I’m no longer willing to “agree to disagree” with racist people in my life.

Which means I’m having uncomfortable conversations which I hate but Black people have been uncomfortable living under systemic and outright racism for centuries while I’ve had a whole lifetime to be “comfortable” with my head in the sand.

I emailed my favorite underwear company KNIX when I didn’t see them speaking up (turns out they have been. I just missed the emails.)

I emailed Ban.do (used to be one of my favorite places to shop) to let them know I wouldn’t be shopping with them any longer because of racist comments made by the founder, Jen Gotch.

Are you willing to fail with me at this, put your ego aside, listen and learn?

Here are a few resources to get you started:

Kanesha Baynard shares some things you can do right away: https://www.boldlivingtoday.com/blog/2020-06-08-6-key-things-to-know-about-anti-racism/

Jay Jay Ghatt shares some tips for non-Black influences (if you are non-Black and have any doubt, YOU have a voice so YOU are an influencer): https://www.youtube.com/watch?v=8noE962EEnE&t=609s

Here’s a great list of resources a friend just shared called 75 Things White People Can Do for Racial Justice: https://medium.com/equality-includes-you/what-white-people-can-do-for-racial-justice-f2d18b0e0234) in my community and attended a town hall hosted by Rachel Rodgers yesterday (https://helloseven.co).

I remember when Black Lives Matter became a common meme. I didn’t get it. I was the first to think, “Wait. All lives matter.” I felt defensive, like someone was telling me that black lives matter more than other lives. What I came to realize was that of course all... read more