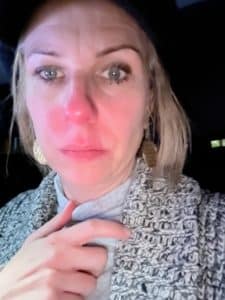 Last week I posted to my blog after a year-long hiatus.

In true form, I shared a lot of myself. It’s interesting, the me of 2017 was much more willing to do these things. But the me of 2023 feels so much more deeply. There are so many feels. There is self-doubt. There is fear. Well, mostly those two. But they huuuurrrrt. Amy 2023 is so tender.

It has taken more courage to be seen than ever before.

After posting to Facebook, I left to pick up a kid. On the way out to the car I looked up at the night sky and I said, “I need a sign that what I did was in alignment with my divine purpose.” I continued to watch the night sky for a minute or two, I guess hoping for a shooting star or maybe an unidentified flying object?

I got in the car and drove to the middle school.

Along the drive, I filled with appreciation for my friend Amy who posted a sweet comment under my Facebook post. In the parking lot, I got out my phone and texted her a thank you.

This gave me an idea. I’ll text some other friends for moral support. Ask them to say something nice under my post like Amy had.

I searched up a group text that was already there from a previous convo and used it to send out my appeal.

A few seconds later l got a text from a group of moms who had been texting back and forth about a birthday party my son had been invited to. Wait, I thought, had I accidentally sent my text to this group???  These moms didn’t know me from Janet. Had I just sent them a request to post an encouraging comment under my Facebook post???

I checked again. Oh, thank God no. It was just a coincidence.

Still, I hadn’t heard back from any friends.

At the realization of this double vulnerability hangover, I burst into full-on crocodile tears in the car and worried that my daughter would come in from Volleyball to find me inexplicably sobbing. Still, there was a part of me who observed the part of me who was releasing all this sadness, not fully understanding why such big emotions. And that part of me was so fascinated she took a photo of herself (see above) and had the thought, “hmm maybe I could write about this.”

Around that time I looked down at my phone, made a mental note to put that birthday party into the cal, and checked to see if any of my slacker friends had texted me back or posted on the blog.

As I fiddled with my phone, I said to myself out loud: “I notice myself having a bit of a meltdown over this blog post and I’m feeling really anxious and it is what it is.” Because I’m in the habit of narrating my life.

Then I noticed another text.

It was from my husband Ron.  “INCREDIBLE BLOG POST!!” Sent around the time I would have been looking up at the night sky.

I texted him back: “Marcee, you are the shit,” because we share a secret language made up of Jerry McGuire quotes. Translation: You have no idea how badly I needed to hear that, thank you.

And I realized, vulnerability hangover or not, magic happens when you do things from a place of love.

And I stopped putting energetic pressure on my friends to validate me. Then I wrote this post and had a good laugh at myself.